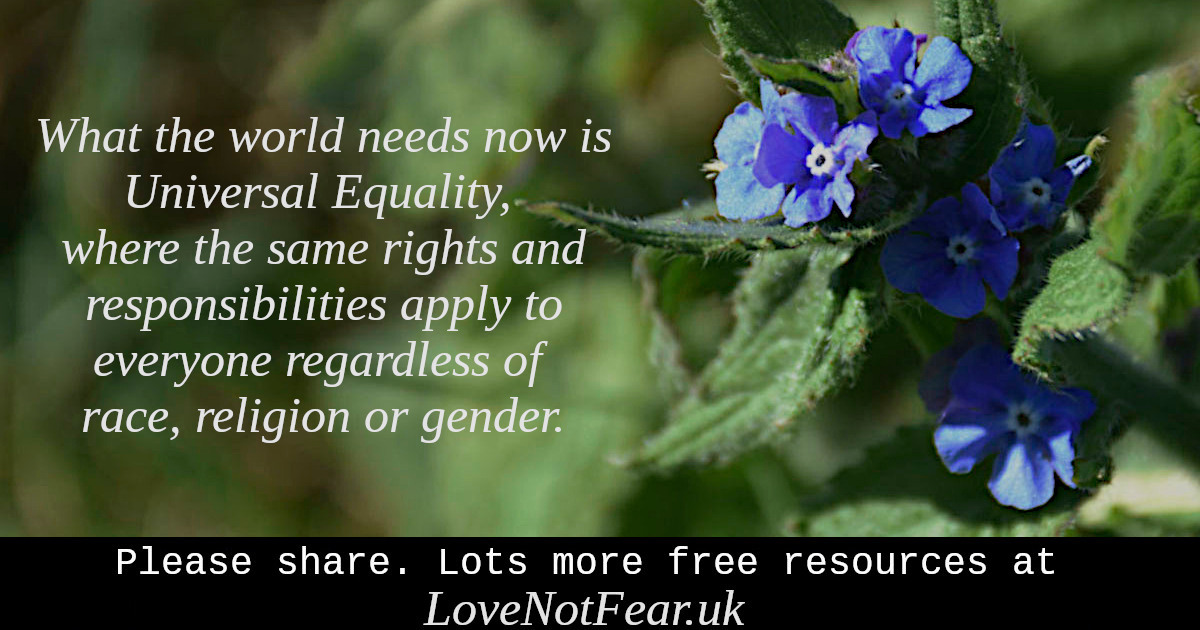 Welcome videos Let's feed the community The Age of Aquarius The ancient Greeks had a legend What are the advantages of having an
Informal Free Gift Economy? I have a dream This world is broken A Game We Did Not Devise Money is the root of all meanness The Globalist Elite Rise of the robots Migrants - Citizens of the World? World Peace we can rebuild our democracy Universal Equality WOKE or AWAKENED? The Black Lives Matter / Antifa race riots Let's get started Who Are The Archons
reality or just a crazy conspiracy theory? Memes Free Gift About me Public speaker Contact Jack

No one thing can be equal by itself although two things can be equal with each other. This is why feminism is doomed to fail, it seeks equality for just one gender.The same qualification applies to any attempt to end racism unless it considers the rights of all races, including white people.

Let's have no more flotillas of little groups each demanding more rights for themselves (the me, me, me brigade), just a basic, fundamental understanding that every citizen is the equal of every other citizen regardless of race, religion, gender or vaxx status.

Wikipedia defines feminism as a range of political movements, ideologies, and social movements that share a common goal: to define, establish, and achieve equal political, economic, personal, and social rights for women. https://en.wikipedia.org/wiki/Feminism

So according to this definition, feminism is doomed to fail because it seeks equality for just one gender.

The Women's Equality Party was formed in the UK on 28th March 2015 following a public meeting in the Royal Festival Hal, London. Their Mission Statement claims We are pushing for equal representation in politics, business, industry and throughout working life. We are pressing for equal pay and an equal opportunity to thrive. We are campaigning for equal parenting and caregiving and shared responsibilities at home to give everyone equal opportunities both in family life and in the workplace. We urge an education system that creates opportunities for all children and an understanding of why this matters. We strive for equal treatment of women by and in the media. We seek an end to violence against women.
- http://www.womensequality.org.uk/

Note that the emphasis is strongly biased towards women's rights, NOT equality for men AND women or even between men AND women. We strive for equal treatment of women .... . How can women possibly be treated equally to nobody? They can only be treated as being equal with men, and only if men are treated equally with women. Why don't they just call themselves The Equality Party? Why be sexist about it? It is the female chauvinism imbedded in the feminist movement that makes it so very hard to make gender equality possible.

We need a new approach which seeks equality for everyone regardless of gender, race, religion or vaccination status, a Universal Equality Movement. Why can't we just stop discriminating against each other? It is only by recognising that we are all equal to one and other that we can move forward into the 21st century and beyond without fear of discrimination.

But equal does not mean the same. We are all equal but different and it is our differences that make us special. Social engineering stamps all over our individuality with its muddy boots. I remember a few years ago, misguided school careers advisers trying to push more girls to become engineers and more boys to become midwives. How crazy. What they should have been doing instead was to guide pupils who are interested in engineering towards engineering careers, and pupils who were interested in midwifery towards midwifery careers regardless of gender.

We hear spurious statistics in the media all the time. Only such a percentage of whatever post it happens to be is occupied by women. Well perhaps that is the same number as the percentage of women who applied. Perhaps women tend to prefer doing different things. What matters is not whether an equal number of women are following a certain career but rather whether individual people are following the careers they enjoy, regardless of gender, race or religion. Only that way can equality be achieved.

As I write this the United Nations are canvassing for a new Sectetary General. It has been pointed out that so far they have all been men and its time a woman got the job. Great, if a woman applies who is the strongest candidate, with the best experience, she should get the job. But let's not make a sexist decision here, the job should go to be best candidate regardless of gender, race or religion.

David Cameron, when he was Prime Minister of the United Kingdom, made a big deal about how many women were in his cabinet. In a post-election reshuffle, the Prime Minister promoted 12 women to senior cabinet positions making one third of all cabinet ministers female. The media, with their usual lack of taste, dubbed them Dave's Darlings. If you want to find evidence of sexism look no further.

Priti Patel, Anna Soubry, Andrea Leadsom, Amber Rudd, Liz Truss and others all got high profile posts. Why? Because of their experience and proven abilities? NO! Just because Cameron wanted to curry favour with the feminist lobby, that's all.

Every time you give someone special dispensation because of their gender, race, religion or vaccination status, you set the cause of equality backwards not forwards.

We will never achieve equality this way. Biased decisions may well have been made in men's favour in the past, I don't deny that. It may still go on today in a reduced form, but, as Albert Einstein said, We can't solve problems by using the same kind of thinking we used when we created them.

We need to acknowledge that anti-male sexism is just as bad as anti-female sexism just as anti-white racism is just as bad and anti-black racism. Most people I speak to seem to be using a racist definition of racism and a sexist definition of sexism. We must move towards a new paradigm of Universal Equality. Jobs should never be awarded on purely sexist or racist grounds in some misguided attempt at social engineering. Jobs must go to the most suitable candidates regardless of gender, race or religion.

I wonder if the same principle would work with gender. Perhaps the best solution is to stop bleating on about it and just quietly get on with our lives.

To illustrate the level of sexist bias in the British government, consider the Minister for Women and Equalities. Even the title is sexist. Its unbelievable. The Rt. Hon. Nicky Morgan was appointed Education Secretary and Minister for Women and Equalities on 15 July 2014. The post is currently held (2021) by Elizabeth Truss. The thing that really shocks me is that this sexist title still exists seven years on.

Is there a Minister for Men and Equalities? No! The very phrase 'Women and Equalities' is an oxymoron. As I said at the beginning of this article, women can only be equal to some other group, such as men, who must also be equal. Otherwise its a nonsence.

I am sure similar craziness must go on in other countries too.

Some years ago I wrote to the BBC asking whether all their radio presenters were totally oblivious to their own irony and double standards? They had run a story on the Radio 4 P.M. programme about Muirfield Golf Club in Edinburgh only accepting male members. During the programme they interviewed Maria Miller, the then Minister for Women and Equalities as well as a spokesperson for the English Women's Golf Association. They were both vehement in their condemnation of Muirfield's sexist policy. Quite rightly too in my humble opinion.

However, if its wrong for Muirfield Golf Club to exist only for men, then its equal wrong for the English Women's Golf Association to exist only for women and its equally wrong to have a Minister for Women and Equalities rather than a Minister for People and Equalities. Yet the radio presenters were totally oblivious of their own irony and double standards. (Muirfield Golf Club have now changed their policy, which is good. )

Perhaps it shouldn't be automatic though. Perhaps equality should be applied for at age 18. Perhaps people should make a statement requesting to be treated as the equal of every other adult citizen and agreeing to treat every other adult citizen as their equal too, regardless of race, religion or gender. That way anyone who thinks his or her gender, race or religion places them above other people would be excluded from having equal rights.