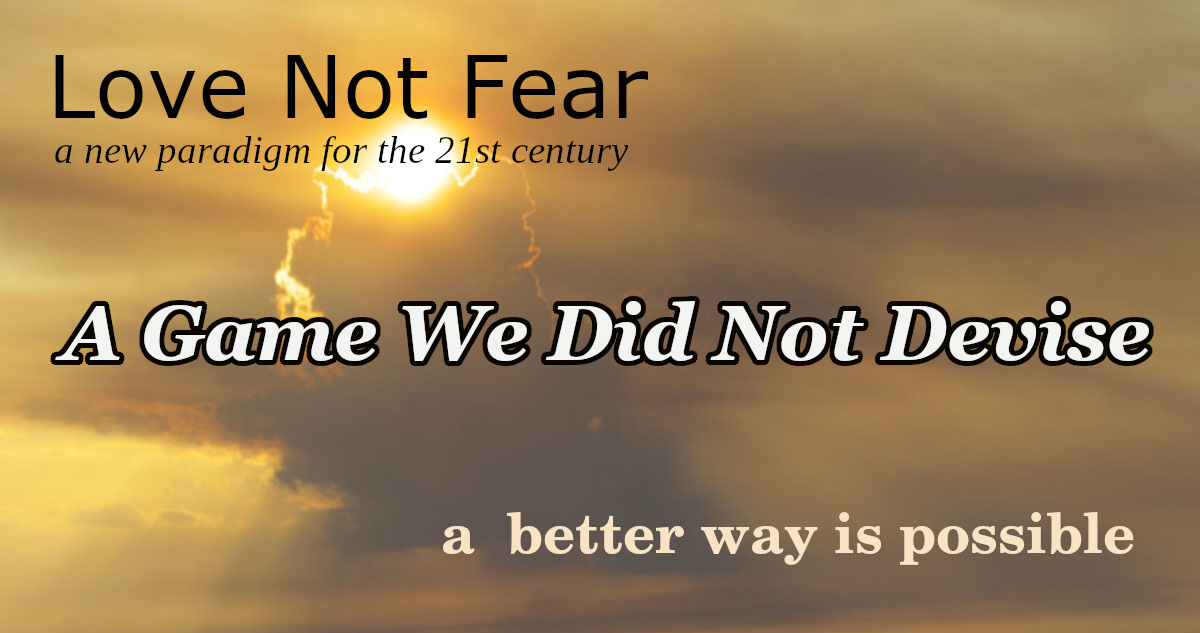 Welcome videos The Age of Aquarius The ancient Greeks had a legend What are the advantages of having an
Informal Free Gift Economy? I have a dream This world is broken A Game We Did Not Devise Money is the root of all meanness The Globalist Elite Rise of the robots Migrants - Citizens of the World? World Peace we can rebuild our democracy Universal Equality WOKE or AWAKENED? The Black Lives Matter / Antifa race riots Let's get started Who Are The Archons
reality or just a crazy conspiracy theory? Memes Free Gift About me Public speaker Contact Jack

A Game We Did Not Devise

We are born into a game we did not devise where the rules are stacked against us and in favour of the globalist elite. We have no way to win this game. We may make some money, we may get a fancy job title, we may even get some power but ultimately, even as the CEO of a big company, we can never win this game. There will always be a bigger parasite sucking us dry. Our only way out is to stop playing this game and devise a fairer one.


The currency of the game is money. Stop using money and the game is over. The banks will collapse. The globalist elite will be reduced to ordinary citizens, just like us. The nightmare game will be over and we will be free.


We will be free to devise a new game based on freely giving and freely receiving, on helping each other to thrive, on freedom and independence and on love and co-operation. A true loving utopia.


It is my true belief that the thing that makes people mean, intolerant and aggressive is fear, fear of poverty, fear of attack by individuals, terrorists or foreign powers, fear of death or the even greater fear of living a meaningless life.


We feel threatened so we threaten and attack others.


We invade other people's countries then wonder why their terrorists attack us. We are mean to our workers then blame them for going on strike. Some intolerant migrants call our women white prostitutes for dressing normally then wonder why our people are intolerant of their dress choice.


But wouldn't it be wonderful if nobody felt threatened anymore, if we all felt safe and appreciated? Wouldn't that be a better world to live in?


This is a very controversial book and I don't expect you will all agree with everything I say, and that's okay. This next little bit is probably the most controversial of all. Please take from it what you will and leave the rest. That's okay too.


In this book I talk a lot about being excellent to each-other and I talk about other people but I don't really believe there are any other people to complain about or to be excellent to. Let me explain


You have probably heard it said before that we are all one. That idea can be taken on many different levels. We can talk about the brotherhood of man or whatever the modern politically correct version of that may be. Some people, such as myself, take the idea further. We believe it to be literately true.


Think of a group of islands in a warm sea somewhere beautiful. All separate islands? Really? Take away the water or go diving and what do you see? You see a continuous landscape with hills and valleys, all connected, all one.


The separate islands are revealed to be an illusion brought on by their true reality being obscured by the water.


Well what if we are like those islands, our separateness being an illusion brought on by our inability to perceive ourselves as one continuous energy field?


That's about as far as most people take this idea but not me. I'm even more weird.


About ten years ago I was stopping over in Santander waiting to catch a ferry to Portsmouth so I wandered off to explore the town. It was packed, crowded, busy as hell. Suddenly, while forcing my way through the crowds, I was struck by a very strange idea. Whether an inspiration, insight, enlightenment or sheer madness is for you to decide.


I suddenly realised that all these people were actually, literally me. I had always believed in reincarnation. Since I was a very small child I just understood it and couldn't understand why everyone didn't know it. Nobody had told be about it, I hadn't heard it anywhere, I was too small. I just knew.


But as I grew up I starting reading about it and just fell in with the general consensus that we are all separate, reincarnating souls. This Santander revaluation was something quite different.


I had long understood that time is not linear. Indeed time does not really exist at all in the way we usually think of it. Incarnations don't occur one after the other in a straight line, there is no past or future, its all happening right now, in this moment. All your, mine, their past, future and concurrent incarnations, all happening right now in this moment. And not just people but every life form in the universe.


So, if you can accept that, it's not a huge leap to accept that we are all just different incarnations of the same soul, different expressions of THE ONE, the one soul, Source, God, or whatever term you like to use.


We are all God pretending to be you and me and him and her. We are The Universe experiencing itself.


I certainly don't want to offend anyone's religious sensibilities here. You don't need to agree with me on this in order to understand and enjoy the rest of this book. But if you do want to run with this it will certainly help you to never harm anyone. If the person in your face, really is you experiencing another incarnation, how can you hate or want to harm yourself?


If someone is behaving badly it is only because they don't yet understand what you understand. What is annoying you is really another version of you who does not yet know the things you have learnt. Or maybe just a reflexion of something you need to work on in your present incarnation. So don't fight him or her. Help that other version of you to reach the understanding you have reached.


What is your opinion of this article? Please do share your thoughts.